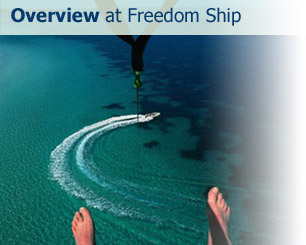 Envision an ideal place to live or run a business, a friendly, safe and secure community with large areas of open space and extensive entertainment and recreational facilities. Finally, picture this community continually moving around the world. You are beginning to understand the Freedom Ship concept of a massive ocean-going vessel. With a design length of 4,500 feet, a width of 750 feet, and a height of 350 feet, Freedom Ship would be more than 4 times longer than the Queen Mary. The design concepts include a mobile modern city featuring luxurious living, an extensive duty-free international shopping mall, and a full 1.7 million square foot floor set aside for various companies to showcase their products.

Freedom Ship would not be a cruise ship, it is proposed to be a unique place to live, work, retire, vacation, or visit. The proposed voyage would continuously circle the globe, covering most of the world's coastal regions. Its large fleet of commuter aircraft and hydrofoils would ferry residents and visitors to and from shore. The airport on the ship's top deck would serve private and small commercial aircraft (up to about 40 passengers each). The proposed vessel's superstructure, rising twenty-five stories above its broad main deck, would house residential space, a library, schools, and a first-class hospital in addition to retail and wholesale shops, banks, hotels, restaurants, entertainment facilities, casinos, offices, warehouses, and light manufacturing and assembly enterprises. Finally, this concept would include a wide array of recreational and athletic facilities, worthy of a world-class resort, making Freedom Ship a veritable "Community on the Sea."

We will expand our team of professionals dedicated to completing our mission. Furthermore, our team will broaden their focus to encompass the successful research and development of other marine vessels and offshore structures. Our passion for excellence will drive us to achieve this vision by combining sound engineering principles and existing technology with high ethical standards and a dedication to our client's needs and desires.

To create a unique lifestyle that allows families and individuals to work, live, and travel simultaneously.

Appearance:
Attractive artwork and creative architecture would grace the ship. Parks and promenades would boast waterfalls, ponds, and extensive landscaping. Most levels would feature large saltwater aquariums. The shopping mall, one of the world's largest, would also be one of its most beautiful. Portions would be dedicated to individual countries, featuring culturally characteristic architectures. The planned 100-foot-wide main deck would lead to a marina at the stern. Over 200 acres of open area are planned for recreation and relaxation.

Comfort and Safety:
The vessel's proposed flat bottom hull construction, along with its extraordinary size, would result in unmatched and unprecedented stability providing a smooth ride in the roughest seas. Proposed safety of the vessel is enhanced by the use of 600 individual air/water tight hull sections. Extensive use of 4 hour rated firebreaks between decks areas within the decks will enhance fire safety. The ship would be virtually fireproof. The proposed electro-static ventilation system would supply uncontaminated, filtered and purified air.

Ship's Movement and Transportation:
As it circumnavigates the world, Freedom Ship would make a series of offshore stops, including exotic tropical islands accessible only by sea. These stops would provide the ship's residents and entrepreneurs with extensive and varied touring and business opportunities, and bring a continual stream of visitors to the ship to patronize its shops, restaurants, and entertainment facilities. The ship would provide as many as 40,000 tourists to ports around the world. These cities and countries would eagerly anticipate this influx, as well as the major market the ship represents for local farmers, fishermen, and merchants. Stopover schedules would be based on business volume and touring popularity. Customers, merchants, businessmen, and residents would be able to utilize the ship's fleet of aircraft and hydrofoils, as well as commercial commuter airlines, to come and go from the ship even between stopovers.

The ship's design would accept up to 40,000 full time residents, 30,000 daily visitors, 10,000 nightly hotel guests, and 20,000 full time crew. This population of 100,000 people provides a wealth of talent and diversity for the private businesses aboard the ship and to those they visit daily on their adventures ashore.